The ragging is strictly prohibited in our college/ institution and taken measures of prohibition and prevention as per UGC REGULATION 2009. The principal of the college is constituted Anti-ragging committee for prevention as well as the prohibition of ragging in the college campus which is to create “ragging free “within the campus and as well as to create and make a “joyful atmosphere” in our college campus and also the head of the institution is requested to fill and sign an Annexure 1, 2 form or to obtain an undertaking from the parents/guardians as well as students while joining in the college.

Ragging means doing an act which causes or is likely to insult or annoyance of fear or apprehension or threat or intimidation or outrage of modesty or injury to the student”. The Anti-Ragging Cell of the college is very vigilant all the times. We have maintained a Zero tolerance zone in the matter of ragging & indiscipline and we have achieved a Ragging-Free Campus. We have not even a single incident of ragging in our campus. Our students are well mannered and well sensitized about the matters of ragging and do not engage in any sort of ragging activities.

We, the Students , Scholars, Teaching and Administrative staff of this college firmly resolve to take a pledge today that we withstand united in making this College “ Ragging Free ” College and We will not involve in ragging either indeed, action and thought in our personal lives. We will promote fraternity and brotherhood with dignity to make this College a “Ragging Free” College. 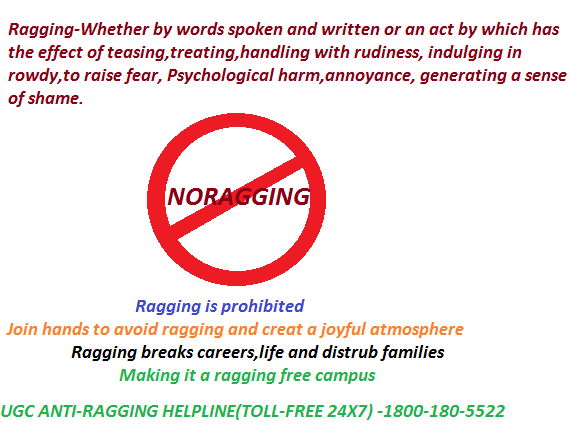